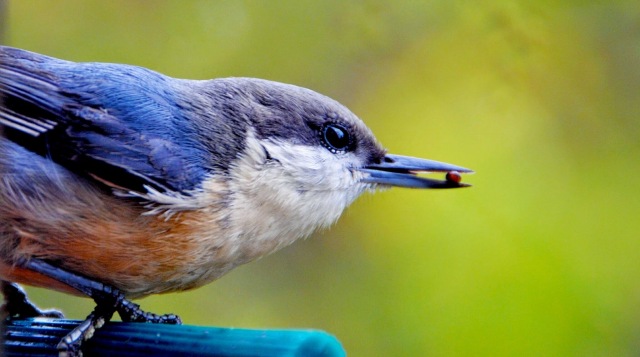 I have a very Type-A personality. I like being involved, giving my perspective, trying new things, and staying busy. And I love that God has given me this energy and drive.

While having a Type-A personality definitely has its benefits, I’ve experienced some significant drawbacks as well. I often struggle to just let things be and to “go with the flow.” This makes me especially attrocious at things like team-building activities and group travel.

I have read a number of interpretations of the Parable of the Mustard Seed, but this week I came across one that challenged me to consider deeper how I manage my Type-A-ness. Here is the text in Matthew 13:31-33:

“He put another parable before them, saying, ‘The kingdom of heaven is like a grain of mustard seed that a man took and sowed in his field. It is the smallest of all seeds, but when it has grown it is larger than all the garden plants and becomes a tree, so that the birds of the air come and make nests in its branches.’ He told them another parable. ‘The kingdom of heaven is like leaven that a woman took and hid in three measures of flour, till it was all leavened.'”

One of the interpretations of these parables that comes to mind was written by Shane Claiborne in his book, Jesus For President. I have great respect for Shane’s work and for his writing, but I think he fails to provide enough specificity and nuance in this particular instance. He makes the claim that Mustard Seed was a controversial plant — it grew aggressively, and had the capacity to ruin gardens, buildings, establishments and empires. He argues that Jesus’ listeners wouldn’t have liked the comparison of the Kingdom of God to mustard seed or to yeast, because Jews weren’t “big fans” of those powerful substances (Claiborne and Haw, Jesus for President, 102-105). He goes on to assert that “Jewish law even forbade planting mustard in the garden,”  and he makes it seem authoritative by citing the Mishnah (Jewish law code circa 200 AD). Unfortunately, the mishnaic text says no such thing: the passage he cites states, “It is forbidden to sow different species of seeds in one bed. It is permitted to sow different species of vegetable seeds in one bed. Mustard and small polished peas are a species of seed” (m. Kel 3:2). It’s actually assuming that Jews will plant mustard in their gardens, and merely cautions them from planting them along with certain other seeds.

When I first read that interpretation it sounded very radical and revolutionary. I now realize that it’s nonsense. You can look up Leviticus 7:13 or Amos 4:5 to realize that Israel was cool with yeast, or you could just walk into a Jewish delicatessen today and order a pastrami sandwich on rye bread with mustard, and then try to make the argument that Jews don’t know what they’re doing with yeast and mustard seed.

The newer interpretation that I find far more compelling came from A.J. Levine’s book, Short Stories by Jesus. She argues that one of the main takeaways from the Parable of the Mustard Seed is that “some things need to be left alone. Keep fiddling with the dough and it will not rise; keep exposing the seed to air and it will not germinate… We are part of a larger process, and although we start an action, once started, it can often do quite well on its own” (Levine, Short Stories by Jesus, 2014: 182). If that weren’t a big enough struggle for my Type-A personality, she then adds that the parable teaches us to “get out of the way... We are not always the focus; sometimes we are the facilitator for something bigger than ourselves… The man plants, or even tosses, the seed. Who sowed it is much less important than the tree into which the seed grows” (Ibid.). Again, how difficult is it to get out of the way when we feel as though what we’re doing is of utmost importance.

The parable actually calls us to let down out superhero complexes. To step back, and to know that the Kingdom of God is here and will continue to exist regardless of our involvement in it. Yes, we can sow seeds and promote the continued growth of the Kingdom of God, but by no means is it entirely contingent on what we do or fail to do.

By embracing this realization we can then give God credit for the growth of the Kingdom of God, and also let down the self-righteous feeling that we are the only ones bringing the love and presence of God to those around us. So let’s sow some seeds today. And then step back, and let them grow.